OMG, has it really been five full days already. I never thought my body would get used to the reduced amount of food I was consuming, but it has pending a few modifications. On day three of our Turbo Takeoff Week, I had a little blood pressure episode. I can normally trace those back to caffeine which I haven’t had in two years before starting this plan. Day four my wife and I switched shakes. Her shakes don’t have caffeine. So she gets stuck with the twenty extra calories. So I took out the caffeine shake and added a half of a Thomas English Muffin and a banana to the mix, along with my regular veggies. That seems to have done the trick. Eating more slowed down my rapid two pounds a day of weight I was losing but I also don’t feel like I’m going to fall over when I stand up. Also, I haven’t eaten over 1300 calories in a day since I started. The actual number is probably closer to 1100 or less on average.

You want to know why you don’t eat a ton of calories, it’s one hundred percent portion control. 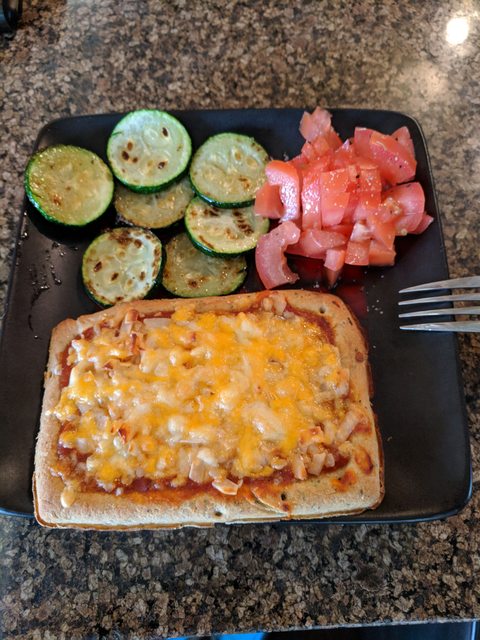 This is a dinner with half a medium tomatoes on the side and a cup of zucchini.

Or a whole tomato next to my pasta dinner. 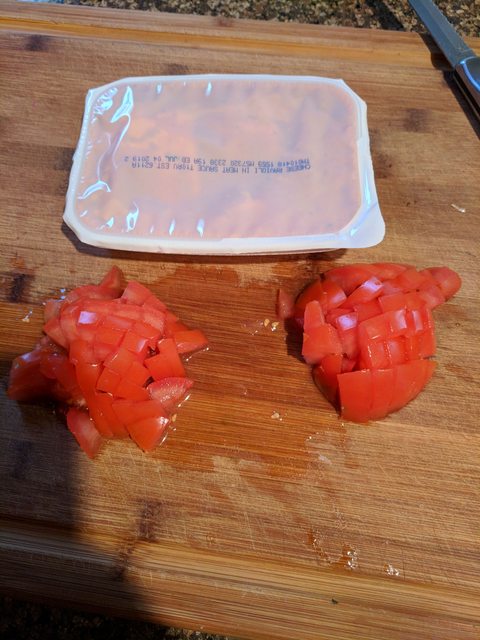 I probably could have lost another three pounds already, but the tradeoff for my health and well being just wasn’t worth it. On a diet like this, you are basically just cutting calories to lose weight. It’s extremely effective, but you have to walk the line carefully. If your body thinks it’s starving, then it will stop burning fat. That’s the exact opposite of what we’re trying to do. Bt cutting calories the goal is to provide your body with enough nutrients to be healthy while encouraging it to burn your fat reserves to supplement. So if you cut too much out you end up hurting yourself. If you want a crazy diet, see your doctor first but also know most people don’t find any long lasting success with those.

Am I hungry? Damn straight I am. I used to eat a lot, and now I don’t. I also feel really good about where I’m at weight wise after five days, I’m down 7.3 pounds. I’ll have the official tally for Turbo Takeoff Week on Thursday morning. If the next two days go well I’m expecting that number to be much closer to ten pounds. Funnily enough, the thing that seemed to screw up my weight loss the most was eating a potato steamer. I think the salt in the sauce made me retain water for a bit, or maybe my body just said whoa after my blood pressure episode. Things feel like they are finally getting back to normal.

Our first cheat day is going to be the day after our Turbo Week ends. I’ll be dining on one Sunway footlong of my choice, over two meals. With a small breakfast. It’s going to be glorious!

My tips to get through your first week.

1. Start with your veggies early. I eat a cup of raw carrots with breakfast every day. (It helps, trust me)

2. Don’t be afraid to add food if you need too.
This comes with the caveat, of don’t be crazy your still on a diet. A doughnut isn’t a food, and neither is pizza. At least, not if you want to lose the weight. I found the perfect balance by adding in a cup of broccoli, one cup of zucchini half a tomato, and half an English muffin dinner. I’ve also added a banana to my shake. If you can handle the first week without supplementing than your going to lose more weight.

3. During the first week stay away from anything prepackaged except for what Nutrisystem gave you. Supplement with fresh veggies, and maybe even a glass of low sodium V8 juice. Anything frozen is going to have more sodium, and you’re going to be retaining more water.

4. Seriously don’t work out. You could die. I know that sounds extreme but if your big like me and pushing your body into that low calories zone (1/3 of what I was eating previously) you don’t need to push it. Trust me you’re going to lose the weight as long as you stick to the calories.

5. I’d stay away from anything to drink. Five days in and I’ve only had water and one glass of V9 low sodium every day. That’s it. No fruit juice, no coffee, no soda. Don’t drink your calories; your body needs the food.

6. Be excited. If you’re sticking to the plan your losing weight. Sometimes it feels hard to appreciate it now, especially if you spent your life going yo-yo-ing up and down in weight like I have. This is the time we live for, where you should feel the best. You have taken the next step; you’re doing something to make sure you live a long and healthy life. Be proud of your progress, it’s a good thing.

7. When you feel like quitting turn on The Big Ward on Netflix or 600lbs life on TLC. Seriously, sometimes that’s all the motivation I need. I was watching an episode of the Big Ward, and as I was watching this lady take a french loaf of bread to make her breakfast, I thought I wonder if that’s how I look too skinny people. They might not be able to fathom what I eat in a day, just like I couldn’t imagine eating an eighteen-inch sandwich covered in french fries and gravy for breakfast. Hopefully, the biggest loser will start again soon, and I can watch that.

8. I know I already said this, but BE EXCITED! This is it, your on the journey. Enjoy it as much as you can. I’ll leave you with a quote bouncing around in my head. I want to say it was from the biggest loser last year but I can’t be sure. “Nothing tastes as good as skinny feels.”